The Effects of Testosterone Replacement Therapy on PTSD

The Testosterone-Stress Connection: How TRT Can Benefit PTSD Patients

PTSD causes a number of dangerous symptoms, including suicide ideation. An estimated 22 American veterans kill themselves every day.

The research shows that PTSD can cause significant harmful reductions in circulating testosterone. The inverse is also true: men with low testosterone are more vulnerable to PTSD.

Here is everything you need to know about the proven link between low testosterone and PTSD.

The Signs and Symptoms of PTSD

Whereas physical injuries such as a lost limb are obvious at first glance, the symptoms of PTSD are subtler and more varied.

Nonetheless, here are the most common symptoms of PTSD:

*Some evidence suggests that as high as 50% of people who battle substance abuse issues also have PTSD.

The DSM-5, the authoritative psychology text in the United States, refers to the events that can cause PTSD as “stressors.”

Researchers are still parsing out the physiological and psychological mechanisms at play that ultimately cause PTSD symptoms. However, they have identified some of the major triggers of PTSD. These can include:

Who Is Most At Risk of PTSD?

PTSD is much more prevalent among the US population than previously understood. Current estimates offer an approximate 10% chance for the average American to develop PTSD at some point in their lives

Because the harrowing and often tragic reality of day-to-day life on the front lines of war is so extreme, most people associate PTSD with returning combat troops.

Unfortunately, the ultra-masculine culture of the military can stigmatize soldiers who experience PTSD following their service, making them less likely to openly discuss their mental health challenges or to seek treatment.

In addition to soldiers, other social groups/occupations are disproportionately affected by PTSD. Examples of professions vulnerable to PTSD include: 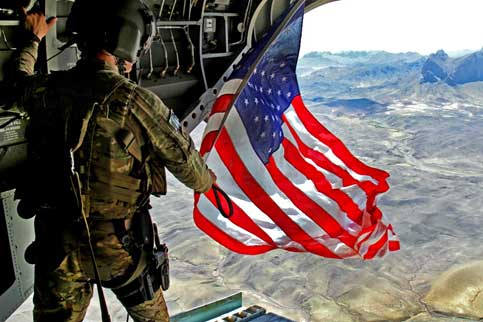 The Unpredictable Nature of PTSD

Accurate screening is one of the biggest challenges in combatting PTSD. Two individuals who experience the same stressor will likely react differently to the stimulus.

For example, in two soldiers fighting in frontline combat, one soldier might emerge unscathed from a mental health perspective with no signs of trauma. The other soldier, though, may develop on of more of the PTSD symptoms we discussed earlier.

Similarly, progression through the stages of PTSD and the timeline for symptoms varies widely from person to person. 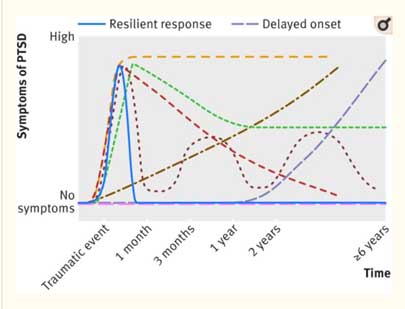 How can we account for these differences in response to traumatic stimuli? Different avenues of investigation might uncover multiple factors contributing to PTSD, but the hormonal response to stress is undoubtedly one of the most significant.

Hormones and PTSD: The Critical Links

Let’s unpack the critical importance of hormones to good mental health in general before focusing on testosterone. Indeed, hormones have such a powerful impact on mental well-being that some experts have begun to study the possibility of hormone-specific psychiatric disorders, meaning conditions caused primarily or entirely by hormonal deficits such as low testosterone.

The male sex hormone is shown to have profound positive effects on mental health. In men with testosterone deficiencies, testosterone replacement therapy (TRT) reduces the incidence and severity of depression, anxiety, and mood disruptions.

But what does the science say about testosterone and PTSD in particular?

Testosterone and PTSD: A Review of the Medical Literature

The hypothalamic-pituitary-adrenal axis (HPA axis) is a network of various hormones that exert enormous influence on the neurological system (called a “neuroendocrine” system). In humans, the HPA axis is largely responsible for facilitating the stress response. 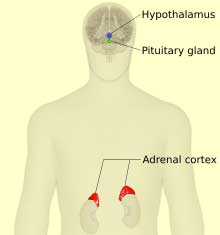 Exciting new research points to the observed increase in PTSD risk in soldier who have both impaired HPA function and low testosterone concurrently.

When stressors (like the ones that cause PTSD) are introduced to mammals, those with higher testosterone levels and higher androgen receptor (AR) activity levels in the brain respond more favorably to stress.

In addition to the mental/cognitive aspect of trauma, physical injuries (such as those sustained by combat troops in war) also carry the potential to cause testosterone deficiencies when they impair testicular function.

The bottom line on the clinical research is that individuals with greater circulating testosterone experience less severe mental and emotional symptoms resulting from stress, including those seen in PTSD.

Other Therapeutic Treatments for PTSD

Testosterone replacement therapy, although certainly a powerful science-backed tool for therapeutically targeting PTSD, is not the only answer.

Additional therapeutic treatments for PTSD – many of them very promising – are currently used by healthcare professionals from coast to coast to treat affected patients, including:

The Bottom Line on Testosterone and PTSD

If you or a loved one has experienced a traumatic event – such as a car accident or intense frontline combat – and struggled with mental health as a result, you may benefit from testosterone replacement therapy (TRT) with bioidentical hormones. 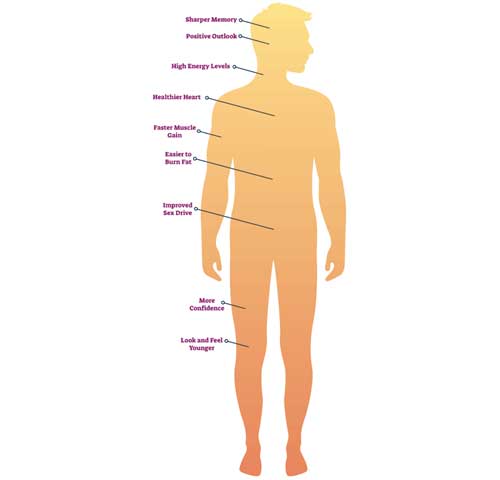 The many health benefits of testosterone

To get started with Testosterone Replacement Therapy, contact Vitality Sciences today. We’ll set up a time for you to consult with one of our expert hormone specialists who will order the appropriate lab work to assess the state of your hormones.

From there, we’ll develop an individualized treatment plan that targets and corrects any hormonal imbalances detected through testing.

Don’t wait to take charge of your hormone health. With the right treatment strategy, you can achieve substantial improvement in various markers of mental health, including a reduction in PTSD symptoms.